As the industry is pushing to implement flight-centric ATM systems IFATCA has to evaluate the benefits and challenges approaching with these kinds of systems.

This paper studies the new challenges for implementation of these systems and identifies already relevant existing IFATCA policy.

1.1 Since DFS German Air Navigational Services and possibly other ANSPs are pushing for an early implementation of a new ATM philosophy called “Sectorless ATM / Flight centric ATM operations” IFATCA must discuss and adopt a set of guidelines to accompany and critically follow the development and their potential implementation.

1.2. As “Sectorless ATM” (S-ATM) is a SESAR project many other ANSPs are watching for the result of the first study and test-operations within Germany or simulations in other countries. It is possible that these ANSPs might wish to establish similar operations in their own airspace and so this topic is not limited to the German airspace.

This working paper is about sectorless ATM, also known as the “flight centric ATM” concept.

What is S-ATM / flight centric ATM?

Sectorless ATM is a potentially revolutionary concept for air traffic management in the upper airspace. It aims for en-route air traffic control without conventional sectors. One controller will be assigned several aircraft regardless of their location and will guide these aircraft during their entire flight in the FIR without being responsible for a specific sector (flight centric). The idea behind is a significant increase in capacity and controller efficiency using this concept as this aircraft-centred approach is supposedly providing more flexibility for ANSPs and ATCOs, fewer handovers and more direct routes.

The concept is being developed since 2008 by DLR (DLR is the German national aeronautics and space research centre) in cooperation with the German ANSP DFS and Frequentis as a project of SESAR. Its implementation is now planned for winter 2021/2022.

Air Traffic Controllers always were and still are responsible for one defined airspace. Their license indicates that they are entitled to execute their responsibilities according to their training, knowledge about procedures, rules, regulations and geographical expertise laid down for that airspace.

2.4  As an example, the LUXIE-Sector in the UAC Maastricht or the WUR-Sector in UAC Karlsruhe have reached their maximum capacity a long time ago.

These sectors cannot be divided into smaller sub-sectors anymore without creating a significantly higher amount of radio transmissions and coordination, negating the theoretical increase in capacity. Each new sector boundary, vertical or horizontal, increases coordination, has negative effects on workflow and therefore the need of more staff to keep the traffic numbers at least the same.

2.5  DLR and DFS have commonly developed the principle of “Sectorless Air Traffic Management”, S-ATM (formerly known as LRM2020 and now having been re-named “Flight centric”) with the intention to counter this development – and to increase ATCO productivity in general. 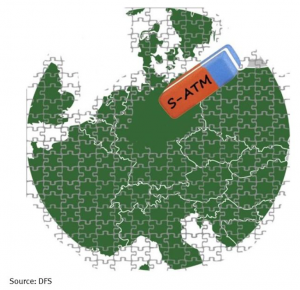 The basic principle is that one ATCO is responsible for a predetermined maximum number of aircraft (generally 6-8) anywhere in the FIR/UIR – other aircraft in that FIR/UIR are controlled by different controllers at the same point in time. 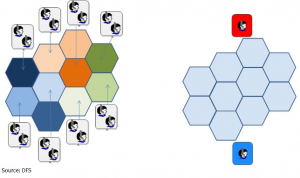 2.6  A set of rules is yet to be developed to determine which ATCO is responsible for the provision of avoiding action in case two aircraft create a conflict which are, however, under the control and responsibility of different ATCOs.

As a consequence, an advanced ATM system is needed to provide conflict detection (e.g. MTCD) and to suggest vertical maneuvers along the trajectory.

2.7  DFS has meanwhile parted ways with DLR and is trying to implement S-ATM as a high cruising level solution in a geographically limited airspace, because the number and range of vertical movements is rather low, which reduces complexity. A downgraded version of S-ATM will be tested in the form of a sector in the UAC Karlsruhe East sector group (Germany) at flight level 385+ only within the confines of 2 out of 5 sectors very soon. Future plans include a UIR-Top-Sector FL 375+ from 2024. 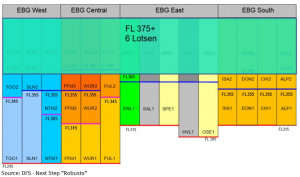 As can be seen in the picture the idea is to have a limited amount of ATCOs be responsible for top sectors of different sector groups within the flight centric system where you normally have to staff all the sectors individually with 2 ATCOs.

The original idea was to change the setup on the HMI as well so that the name “flight centric operations” is the perfect name for what you can see on the radar screen.

All aircraft under control of the ATCO are displayed on the screen, however not on a geographical map but as single airplanes with separated parts within the screen. 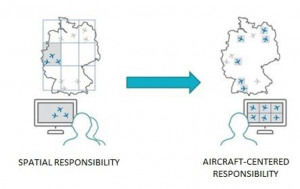 Presently the software for that is still not ready for real operations which means that test operations will go live with a regular radar screen and the system is highlighting aircraft under control of the ATCO concerned. This most possibly is realized by using different colours for different aircraft groups (under control, concerned, unconcerned, sent, etc.)

2.9 The latest information (dated spring 2020) indicates that the plan above is not supported any longer due to technical problems and the ATCO will work this new concept on a regular radar screen like today. This increases the need of excellent support systems further as with growing traffic the human factor is getting more and more important for tasks like maintaining situational awareness.

2.9.1  The latest simulations are still showing a lot of technical and operational problems. Determining ATCO workload and the level of complexity expected if this concept is implemented are just two examples.

The initial idea was to introduce this concept above FL360. However, to keep the complexity of the concept manageable, DFS has decided to aim for FL380 as the lowest level to be used.

2.9.2  For the same reasons the geographical area concerned is reduced to cover up to a maximum of 3 traditional smaller sectors only, instead of larger areas or even the whole FIR.

2.9.3  The problem of training and licensing is presently not addressed at all. SESAR partners plan to issue a FIR license so that every ATCO in units introducing these systems will work the complete FIR even if they are presently only in possession of a sector group license not covering the complete FIR.

As IFATCA is not in general against new systems but rather looking at their effects on safety levels, it provides a list of requirements in the IFATCA TPM that must be met before the introduction of such systems.

2.10.1  IFATCA must oppose new systems, or even a new philosophy of ATC, which provides a lower safety level. IFATCA’s aim must be to maintain or better yet, increase safety. Therefore, new systems must have equal or better safety levels than the preceding ones.

2.10.2  As S-ATM involves leading aircraft from the entry point towards the exit point of the airspace without full awareness of other traffic in the same area, crossing points and conflicts are dynamic.

Controllers of simulations in Hungary in cooperation with DLR and the research, Development and Simulation Department of Hungarocontrol show that the level of situational awareness is very bad in comparison to today’s system mainly due to HMI issues and filtering problems. The mental traffic picture is not fully available for each ATCO.

Not only the setup of the screen but the design of the airspace as well, has to support these new working methods. Provisional policy regarding this is already in place:

2.10.3 The ATCO may not be aware of other aircraft until the system is generating alarms for the appropriate people. As a conflict can be based on 2 or even more aircraft (and subsequently 2 ATCOs or more) there must be rules in place that govern who is responsible for separation of two or more aircraft under the control and responsibility of two or more ATCOs.

2.10.4  In crowded areas frequencies for air traffic control are scarce. S-ATM has a large need for frequency space as every ATCO has at least one VHF and one UHF frequency. Depending on the size of the airspace it is possible that each ATCO has to use even more frequencies as the frequency protection area does not allow the use of one single frequency over hundreds of miles. The idea of ANSPs to use one frequency for more than one ATCO to circumnavigate this problem is unfeasible.

2.10.5  To keep the level of safety as discussed in 2.9.1 in case of system failure there has to be a backup system capable of equivalent functionalities available without delay. The idea of a spontaneous transfer of responsibility to a sector-related ATCO is unfeasible as the ATCO might take several minutes for that handover as they have to speak to up to 8 individual ATCOs who might be busy already to answer incoming calls when all other S- ATM controllers want to get rid of their traffic at the same time as well. This means that the voice communication system between controllers must be capable of these new working methods.

2.10.6  The ATCO-license must include all geographical information necessary for any abnormality and emergency. For example, information about alternate aerodromes etc. in order to be able to deliver the support to pilots as in conventional systems. This includes the technical support to show the ATCO the exact geographical location in case of any abnormalities without delay.

2.10.7  Since the ATCO is no longer aware of all traffic in the airspace, the ATM System must not only support but also take over required conflict detection and conflict solution. SESAR itself states that

2.10.8  Technical solutions for voice connection to external partners need to be found as these partners can not know which ATCO will be in charge of the aircraft concerned. When flights crossing boundaries can belong to 25 or more ATCOs in one room there is no chance for neighbouring controllers to know who to call for coordination purposes. An additional coordination controller position would be a possible solution: One ATCO taking all the phone calls to forward them on to the responsible ATCO. This means another step in between and opens up room for possible errors.

3.1  IFATCA has strong concerns regarding the implementation of S-ATM as planned, however IFATCA is always happy to see new systems emerge which adhere to relevant policy and strengthen safety.

3.2  IFATCA will continue to watch the industries’ activity on flight centric ATM systems and create more relevant policy when more details of these future systems are presented and more research and/or simulation has been done.

3.3  Before the introduction of a flight centric system, the following requirements should be fulfilled.

IFATCA is opposed to the concept of flight-centric ATM until critical safety issues and human factors issues are fully understood and resolved.

And is included in the IFATCA Technical and Professional Manual.

Video Euronews about SESAR programme: Changing the skies of the Europe https://www.youtube.com/watch?v=9zoAXEApo7w.