Air traffic is growing at a significant rate. There is also an increasing demand for more operating flexibility to improve aircraft efficiency and to reduce the impact of air travel on the environment. Improved tools are required to safely manage increasing levels and complexity of air traffic. Aeronautical surveillance is one such important tool in the air traffic management (ATM) process. (ICAO, 2020)

As far as air traffic control is concerned, the following section offers an overview of the most common ground-based surveillance technology and equipment:

Automatic Dependent Surveillance-Broadcast (ADS-B) is a discrete, near real-time air traffic surveillance system. The system automatically pulls data from aircraft equipped with an ADS-B transponder – requiring no pilot or external input – and regularly broadcasts it for detection by ATM providers and other airspace users.

While ADS-B receivers have traditionally been located on the ground, these ADS-B sensors are now located on low earth orbiting satellites opening the door to global surveillance coverage by providing line-of-sight well beyond the limits of ground-based networks.

Wide Area Multilateration (WAM) is a system of ground stations that receive signals from aircraft transponders to determine aircraft position. This information can then be used by an air traffic controller for SSR-equivalent surveillance and separation.

A PSR locates and displays aircraft position (range and azimuth) based solely on the radio echo.

An SSR interrogates an aircraft’s transponder, which causes the transponder to send back an identification code or aircraft ‘TAG’. The radar will display the ‘TAG’ and other information returned, along with the position, for the air traffic controller.

At some larger airports, surface aircraft and vehicle traffic are monitored during periods of reduced visibility using what is called an “Advanced Surface Movement Guidance and Control System A-SMGCS”. The Ground Controller in the control tower monitors movements of aircraft and vehicles on a map display based on data from a high definition PSR. Runways, taxiways, building outlines and other obstacles are typically overlaid on the radar display. (NAV Canada, 2020) 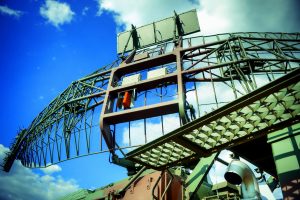