The development of MLS procedures is moving very quickly. At present, only a few States are proposing to use MLS. If the use of MLS becomes widespread then the procedures being developed will become standard at all large airports.

This paper outlines some procedures that being proposed for MLS. The ICAO PT/LVP will discuss the proposals in April 2001 and produce draft MLS procedures.

There are plans for MLS in The Netherlands, France, Switzerland and the UK. MLS equipment will generally be installed on runways which are also equipped with ILS. In some cases MLS only may be provided on a runway not suitable for ILS. The initial airborne implementation will be on Airbus A320 family aircraft. At present there are no plans to equip Boeing aircraft and it may not be economic to equip long haul aircraft. This will result in a mixed ILS/MLS equipage for a long period of time.

The driving force behind these procedures is the desire of operators and airports to increase capacity during Low Visibility Procedures (LVP). It is expected that procedures developed for MLS will also be applicable for GNSS. It has already been agreed that the objective is to develop MLS procedures that will require the minimum amount of change. The basic principles being discussed in the development of MLS procedures are outlined in this paper.

The types of operations being considered are:

All these operations may be on an Arrivals only runway or an Arrival/Departure runway.

Airport flow rates in LVP’s must be published indicating the ILS and MLS capacity. The CFMU must process the flight plan information and deliver the appropriate mix of ILS and MLS aircraft. Flight processing systems must display the MLS equipage to the controller.

When not in LVP, operations will be the same as today with no significant changes required. In mixed mode ILS/MLS, there will be no differences between the handling of ILS and MLS aircraft and no changes in the final approach spacing. There may be a requirement to clear each aircraft for an ILS or MLS approach as appropriate. It is planned that this will be subject to local procedures.

A fundamental principle of operations in LVP is that a contract must be established between the pilot and the controller stating which approach aid is to be used. The equipage will be indicated on the flight plan, but in order to confirm which approach aid the pilot will actually use, this must be specifically confirmed by RTF. The LVP for each State will indicate when the pilot is to confirm the approach aid (normally be on first contact with approach or ACC). On the ATIS the LVP in operation message will be extended to include the requirement to request an MLS approach on first contact with approach control (or ACC).

The aircraft will be vectored onto the final approach as today, but the controller will provide closer spacing for an MLS aircraft. E.g. in a case where the standard spacing for ILS aircraft in LVP is 8nm then the MLS spacing might be 6nm. Vortex spacing would still be required if appropriate. NOTE that the MLS spacing is provided IN FRONT of the MLS aircraft where vortex and other spacing requirements are normally expressed as the distance behind an aircraft.

The handling of the approach sequence and the possible need to give special treatment to MLS aircraft to achieve the required landing stream will be handled on a local basis.

It will be mandatory to include the approach aid in the phraseology “cleared for ILS/MLS approach” during LVP but optional at other times.

When making the first call to the tower, the pilot will report established on the ILS or MLS. In order to standardise this call for pilots and controllers, this will be done all the time, not just in LVP. The controller will have the MLS equipage of the aircraft displayed, but this call will confirm the approach aid being used and allow the controller to check that the correct spacing has been applied It is planned that the MLS facilities will be referred to as the localiser and glidepath for compatibility with ILS. The crew will also need to establish on the MLS localiser first and then descend on the glidepath, as with ILS.

The existing requirement for ILS aircraft to receive landing clearance at 2nm (1nm at the latest) will remain.

The issue of landing clearance for an MLS aircraft depends on the runway itself and the OFZ. For MLS the reduced signal protection requirements mean that the LSA can effectively be ignored.

For MLS, the basic requirement will be that the preceding landing aircraft must be clear of the runway before landing clearance is given and clear of the OFZ before the landing aircraft crosses the beginning of the runway (not at 200ft as at present). The objective will be that landing clearance SHOULD be given before 1nm. It will be possible for this to be delayed beyond 1nm. It will still be the controllers responsibility to give a landing clearance or go- around instructions although the controller will be aware that the aircraft will go-around at 200ft is a clearance is not received.

It will not be mandatory to install SMR but where the procedure requires the aircraft to be clear of the OFZ there is a need for the controller to identify this point and it is only with SMR that this procedure could be implemented. 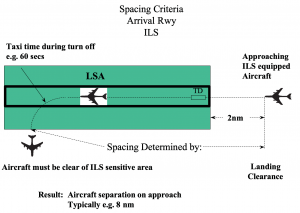