2.1. Virtual Tower Concept as introduced by the Swedish ANSP

This concept aims for small aerodromes with little IFR traffic. The basic concept includes a camera mast to be located at an optimum location at the airport. The cameras shall provide a sharp and stable picture even under strong wind conditions and will be infrared capable. Cameras shall also be vertically adjustable to select optimum view with regard to visibility and clouds.

A traditional tower cab is built on ground. Live pictures are displayed on the virtual windows. The view is comparable to a real tower. A dome may be used to display traffic overhead. This virtual tower cab does not have to be located at the airport. An aerodrome control centre with more than one virtual cab may be possible. 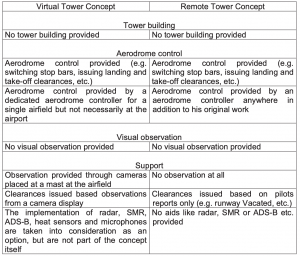 2.3.1. Like in the concept for remote towers these plans appear to give less priority to visual observation. Unlike the “remote tower” concepts, “virtual towers” are planned to be supplied with compensatory devices to replace direct eyesight through cameras.

Still cameras even when using the most advanced techniques currently available cannot replace the three dimensional view from a human eye. Distances are hard to estimate in particular when the provided picture on the screen shows a perfectly sharp image.

ICAO provisions demand for visual observation, but unfortunately still leave some space for (mis)interpretation. Therefore, TOC suggests the drafting of a clear definition for the term “visual observation” highlighting the ability of the human eye to focus on particular objects rather than on the whole picture and to obtain a three dimensional impression of space rather than a surface (plane). Human eyesight may be supported by devices that do not affect the above mentioned advantages (glasses, binocular).

3.2 The parts of air traffic control service described in 2.3.1 shall be provided by the various units as follows:

7.1.1.2 Aerodrome controllers shall maintain a continuous watch on all flight operations on and in the vicinity of an aerodrome as well as vehicles and personnel on the manoeuvring area. Watch shall be maintained by visual observation, augmented in low visibility conditions by radar when available. Traffic shall be controlled in accordance with the procedures set forth herein and all applicable traffic rules specified by the appropriate ATS authority. If there are other aerodromes within the control zone, traffic at all aerodromes within such a zone shall be coordinated so that traffic circuits do not conflict.

In the event the aerodrome controller observes, after a take-off clearance or a landing clearance has been issued, any obstruction on the runway likely to impair the safety of an aircraft taking off or landing, such as runway incursion by an aircraft or vehicle, or animals or flock of birds on the runway, appropriate action shall be taken as follows:

c) instruct a landing aircraft to go around

7.3.1.6.1 Whenever an abnormal configuration or condition of an aircraft, including conditions such as landing gear not extended, or unusual smoke emissions from any part of the aircraft, is observed by or reported to the aerodrome controller, the aircraft concerned shall be advised without delay.

7.4.4 When a not previously notified condition pertaining to the safe use by aircraft of the manoeuvring area is reported to or observed by the controller, the appropriate aerodrome authority shall be informed an operations on that part of the manoeuvring area terminated until otherwise advised by the appropriate aerodrome authority.

5.1.3.1 A signalling lamp shall be provided at a controlled aerodrome in the control tower.

2.1.2 Surveillance by the aerodrome controller is normally done by visual means (eyesight) alone, mechanically through the use of binoculars to improve eyesight or electronically, through the use of radar or closed-circuit television….

2.1.3 The height of the tower should be such that, at normal eye level (about 1,5m above the floor of the tower cab) the controller is provided with the visual surveillance previously described…

3.1.  Air Traffic Control is a task based on observation. In order to keep safety and efficiency on the maximum level it is necessary to provide air traffic controllers with the optimum devices to maintain the level of service. Visual observation is an important tool for aerodrome control and shall be guaranteed whenever weather allows. To remove this important tool will certainly decrease the quality of the service provided, and might affect the level of safety in a negative way as well.

3.2.  For the above mentioned reasons this concept is not acceptable for IFATCA. It is clearly contradictory to many of the quoted ICAO provisions. Where there is no obvious contradiction, ICAO paragraphs leave space for interpretation in a direction, which serves economical reasons more than safety aspects. This is unacceptable by IFATCA. Hence, IFATCA should suggest changes to the relevant phrases.

3.3.  For the time being no concept has been introduced that is acceptable to IFATCA. IFATCA does not support any future ATM concept for the provision of Aerodrome Control Service, unless the following requirements are met:

It is recommended that;

4.2  IFATCA Provisional Policy is that Direct visual observation is defined as:

Observation through direct eyesight, not supported by means other than optical aids (glasses/lenses) that correct vision.

An aerodrome control unit is a unit established to provide air traffic control service to aerodrome traffic. It shall provide aerodrome controllers the capability to maintain a continuous watch on all flight operations on and in the vicinity of an aerodrome as well as vehicles and personnel on the manoeuvring area. This watch shall be maintained by direct visual observation, possibly augmented by other means.

Any future ATM concept for the provision of Aerodrome Control Service, is only acceptable to IFATCA, provided that;