There has recently been interest in a new technology surveillance system known as ‘Multilateration’. The term ‘Multilateration’ could be used to describe any system that uses a number of sensors to calculate the position of a target. The term is now commonly used to describe an airport ground surveillance system that uses Mode S secondary surveillance radar (SSR). This information paper provides a technical description of such a system.

Description of the multilateration system

An airport Multilateration system is a co-operative sensor for locating and identifying aircraft on airports and within the adjacent airspace. Its main functions are typically:

Multilateration systems make use of the ICAO standard SSR Mode S system. The Mode S transponder is an essential part of the TCAS collision avoidance system and there are plans to require Mode S equipage for all IFR aircraft in Europe by the year 2003. Each Mode S equipped aircraft is assigned a unique 24 bit address that is contained in every Mode S reply transmitted by its transponder. This address positively identifies the aircraft and can be used for individual interrogation of and, where implemented, data link communication with each aircraft.

The Mode S frequencies can be heavily loaded, particularly near airports, due to the high density of aircraft. Mulitilateration normally uses a passive detection system. A number of receiving ground stations are suitably placed on the airport. The basis of passive surveillance is the Mode S squitter, an unsolicited reply from the Mode S transponder that is continuously being transmitted at a mean rate of 1 per second.

As an aircraft transponder transmits the squitter signal, it is received by each ground station, which determines the time of arrival (TOA) of the received signal and the unique identity. This information is transferred to a central control station. There, the difference of corresponding TOA from a pair of ground stations is calculated. Having a minimum of three ground stations, two lines of position intersect at the aircraft location. A fourth ground station adds the ability to calculate 3D position. Further stations improve accuracy and reduce the possibility of signals not being received due to blind spots.

The high update rate can even be increased if required by selectively interrogating aircraft of special interest, e.g. close to a runway, so that its transponder transmits additional Mode S replies. Systems typically achieve an average accuracy within the covered area of better than 10 m and an update rate of more than 1 per second. Outside this area, surveillance is possible, however with a degraded performance.

Multilateration can be applied to aircraft on the ground as well as to those in the air. Sophisticated signal processing techniques ensure that multi-path (reflected) signals are rejected, enabling the system to reliably operate in difficult airport environments, where strong multi path and shadowing effects exist. Multilateration systems can operate with Enhanced Mode S to downlink aircraft parameters. Normal TCAS and surveillance radar systems are unaffected by multilateration.

Since each Mode S transmission by an aircraft contains its technical 24 bit address, this ensures unambiguous identification of each target plot and correlation with flight plan data. Ground vehicles can be equipped with transponders, providing continuous identification of this traffic on the manoeuvring area. Where implemented, the multilateration could provide datalink communication via Mode S.

Communication between ground stations and the central station can be over telephone lines or other types of data network. Additionally, a number of test transponders are usually provided as artificial targets for permanent system performance monitoring. The following diagram shows the basic configuration with a minimum number of four ground stations. 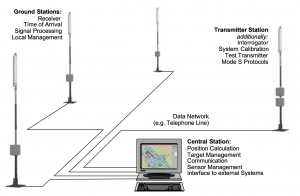 The main functions of multilateration are typically:

A Mode S multilateration system can provide a surveillance system with high position accuracy and automatic identification of aircraft. Multilateration performance can be focussed on critical areas such as around the runway.

The development of multilateration has been undertaken in conjunction with the EU DEFAMM project. This included a full-scale of an A-SMGCS at Cologne Airport in late 1998. A number of airports in Europe are planning to introduce multilateration based systems.

That this paper is accepted as information material.