Monotony, vigilance and complacency are sometimes underestimated hazards in the ATC environment. This paper will highlight these hazards and the risks associated, as well as offer some examples of countermeasures.

1.1 There are times, especially during night shifts, where the traffic volume/demand is low. During periods with light stimulation, monotony can occur. Combine monotony with the fatigue that most will experience on a night shift and it can lead to less than optimum performance when needed.

1.2 Due to ongoing research and sharing of fatigue mitigation efforts in the aviation community, there is a greater understanding of fatigue and how it affects ATCOs, as well as countermeasures that can be applied. However, not much emphasis has been placed on monotony and how this can also affect the overall safety of the operation for ATCOs during night shifts.

1.3 What can an ATCO do to combat monotony in order to maintain the necessary vigilance? This paper investigates that question, analysing ‘fatigue’, ‘monotony’ and ‘complacency’, and proposes strategies to cope with the problem.

2.1.3 Monotony. A slowly developing state of reduced activation which may occur during long, uniform, repetitive tasks or activities, and which is mainly associated with drowsiness, tiredness, decrease and fluctuations in performance, reductions in adaptability and responsiveness, as well as an increase in variability of heart rate (ISO 10075,1991)

2.1.4 Complacency. Self-satisfaction especially when accompanied by unawareness of actual dangers or deficiencies.

2.1.5 Vigilance. The action or state of keeping careful watch for possible danger or difficulties.

2.2.1 The International Federation of Air Traffic Controllers (IFATCA) along with the International Civil Aviation Organization (ICAO) and Civil Air Navigation Services Organization (CANSO) developed a manual, Fatigue Management Guide for Air Traffic Service Providers (ATS); published in 2016. The aim of the manual was to ‘familiarise Air Traffic Service (ATS) providers with the fundamental concepts of fatigue management and to provide a guide for their implementation in day to day operations’.

2.2.2 The manual, which can be called a work in progress as it is the first step in identifying fatigue and offering up mitigation efforts based on current studies and science, offers a short (and incomplete) list of techniques that can be used to mitigate the effects of fatigue, as listed in the chart below. 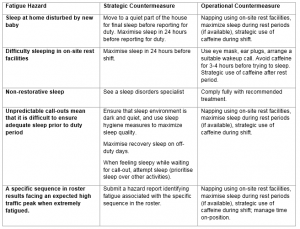 Table 1. Examples of Fatigue Hazards and Personal Mitigation Strategies (Not an Exhaustive List)

2.2.3 From this short list we can see that napping is the recommended countermeasure for most fatigue hazards. However, while an Air Traffic Control Operator (ATCO) is actively engaged in the operation (plugged in), napping is not allowed. Therefore, fatigue management countermeasures cannot also be the countermeasures for monotony.

2.3.1 In November, 2006, Eurocontrol published the results of a study conducted over three years, using ATCOs in both a simulated and an operational air traffic control environment; Monotony in Air Traffic Control – Contributing Factors and Mitigating Strategies. It is the first and only time monotony was researched specifically for ATCOs.

2.3.2 Some results of the study are shared below. To date, however, these findings have not been included in Eurocontrol policy. It was found that the results support the assumption that repetitiveness in task conditions is evoking monotony in both simulation and field settings, which is mitigated by the state of recovery at the beginning of the work shift. The mitigating strategies discovered during this study will be shared later. 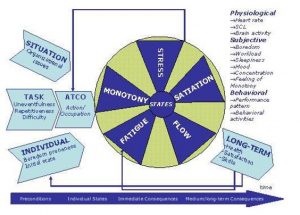 2.3.3 Gordon Dupont, a commercial pilot as well as an aircraft mechanic, worked for Transport Canada from 1993-1999 as a Special Programs Coordinator. In 1993 Mr. Dupont compiled a list of the most common human error factors which can be precursors to accidents or incidents. The list of these twelve common human error factors is called the Dirty Dozen.

2.3.4 As can be seen above (which is not listed in order of importance) Fatigue and Complacency are both contributing factors.

2.3.5 Complacency can be described as a feeling of self-satisfaction accompanied by a loss of awareness of potential dangers. Such a feeling often arises when conducting routine activities that have become habitual and which may be “considered”, by an individual (sometimes by the whole organisation), as easy and safe. A general relaxation of vigilance results and important signals will be missed, with the individual only seeing what he, or she, expects to see. Complacency can also occur following a highly intense activity such as recovering from a possible disaster; the relief felt at the time can result in physical relaxation and reduced mental vigilance and awareness. This particular psychological experience is referred to as a Lacuna.

2.3.6 The Federal Aviation Administration (FAA) had joined Mr. Dupont in the development of the Dirty Dozen and in recent years the FAA, in concert with the National Air Traffic Controllers Association (NATCA) has adapted the Dirty Dozen for use in ATCO training. 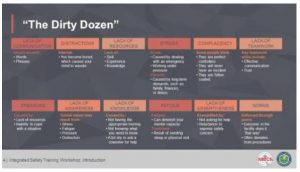 2.3.7 As can be seen within this list for Complacency, some people think: they are perfect controllers; they will never have an incident; they are Teflon-coated. An example that was used in NATCA/FAA ATCO training was: Overconfidence can lead to complacency.

2.3.8 In NATCA/FAA Recurrent Training (2016), in which The Dirty Dozen were introduced to ATCOs, the items in the list were discussed as Internal Factors. Internal factors are ones over which ATCOs have direct influence. Also, within the discussion were ways in which individuals (ATCOs) could avoid having one or more of these internal factors adversely affect their job performance; i.e. “Knowing that Complacency is something that you can control, and has been shown to be a precursor for an incident or accident, how would you avoid Complacency?” The ATCOs attending the class would be called upon to answer, offering up their varied solutions.

2.4.1 ‘Maintaining Vigilance on a Simulated ATC Monitoring Task Across Repeated Session’, (Thackray and Touchstone, 1994) was one of the more recent studies accomplished. This study took 20 non-ATCO participants to determine if their vigilance waned over a two hour period of simulated ATC activity. The participant’s tasks were done without the added tasks of communication, coordination or keyboard entries. This study had participants rate, among other variables, attentiveness and boredom. Attentiveness was rated relatively high at the beginning (pre) of the day one session at 6.89 (out of 10) yet was down to 4.47 by the end (post) of that session. (Day two pre 5.95 post 5.26, Day three pre 5.16 post 5.05). However, boredom started (pre) relatively low at 3.74 on day one, and finished up post) relatively high at 6.53 by the end of the session on day one. (Day two pre 5.05, post 6.0, Day three pre 4.68, post 5.95).

2.4.2 As indicated by these results with the test subjects, attentiveness decreased as boredom was increasing. While this study can be of importance, it does not help us with our dilemma as our job routinely tasks us with more than what these participants were tasked with. Also, it can be said that ATCOs are more vigilant when they have more to do than when they are bored.

2.5.1 Data from the FAA/NATCA Voluntary Safety Reporting System (VSRP), over a five-year period covering the hours between 2200 and 0600 (Night Ops), indicate that 292 incident reports have identified complacency/boredom (monotony) contributed to their event.

2.5.2 Requests to IFATCA for assistance on how to deal with complacency specifically during night ops should signal that a problem such as what the U.S. faces is not confined to that region.

2.5.3 In the agreement between the FAA and NATCA, between the hours of 2200 and 0600, radios and appropriate printed reading material will be permitted in the operational areas, as traffic permits. This does not seem to be enough stimulation to prohibit the 292 incidents mentioned above from happening; or could the number be higher had the stimulation contained in the agreement not been there?

2.5.4 Most (if not all) ATS strictly prohibit any outside stimulation in the control room. In July 2012, a Human Factors specialist, Steven Shorrock, was asked about the science of reading during operational duty. Part of his response: “The task of the air traffic controller, as with many other safety-critical roles, is increasingly visual with high demand for monitoring. Automated tools such as data link and conflict alerts are becoming more common. They usually do not have any associated audible alert or alarm and may not be expected or anticipated. As people naturally become more reliant on such automated aids for normal performance, the need for alertness is even greater.” This is a subtle reminder that ATCOs need to step up their game and not over-rely on automation. He continues: “Stimulation is often at its lowest during a nightshift (particularly 0200-0500), when we also experience heightened fatigue. In this scenario, reading may seem like a good idea to maintain alertness. But what are we really trying to combat via reading during periods of low activity? Most likely, we use reading to combat boredom rather than fatigue.

2.5.5 Boredom is an unpleasant or even distressing state that we naturally wish to avoid. Reading can be stimulating (and effective to counteract boredom) but it can also be visually fatiguing (especially during night shifts). Reading feels like the most natural way to repel boredom and to maintain stimulation, but at the same time it can increase fatigue and distraction and decrease vigilance and alertness – a situational irony.” With this brief complex explanation, is it any wonder ATCOs need help on how to maintain vigilance during night ops when complacency/monotony/boredom besets us?

2.5.6 As mentioned before, the study completed by Eurocontrol offered up mitigating strategies. These strategies are taken from Table 71 of Monotony in Air Traffic Control – Contributing Factors and Mitigating Strategies. 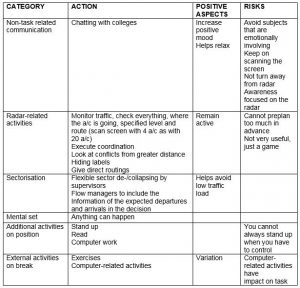 2.5.7 The 2006 Eurocontrol study is a good place to start the discussion about monotony and beginning to address mitigation efforts. However, more robust mitigation efforts may be appropriate. Effort such as allowing for increased lighting in the operation during late night/early morning operations or introducing helpful stimulation such as music at appropriate levels, allowing hand-held games, etc. are just a few examples of possible mitigation that can be explored.

3.1 An ATCO must constantly combat influences such as fatigue, monotony and complacency in order to maintain the proper vigilance which is required of the job, especially during night operations. Having adequate strategies to counteract these influences are necessary to maintain and increase safety.

3.2 The industry has recognized the human factors surrounding fatigue and are dedicating resources to combat it.

3.3 Monotony, in all its forms, must also be addressed and given the same priority as the hazard to safety is the same.

Member Associations should devote resources for research, development of collaborative solutions and training for ATCOs to combat monotony and complacency.

and is added to the IFATCA Technical and Professional Manual.